The history of the Zamprogna Family in southern trade began in 1937, in a small inland town in the extreme south of Brazil, typically mixed with natives of the region with Italian descendants and other European settlers. Some friends and family, looking for something more than the simplicity that the beautiful nature and fertility of the land could offer them, decided to enter the world of commerce, setting up a small society that gave rise to one of the main Brazilian industries in the metal-mechanical sector.

Logically, in the beginning, the products marketed were none other than the basic “dry and wet”. The first step, however, had been taken. In a short time that small business started to act as a “general products warehouse”, diversifying the offer of its products and growing in such a way that that city became small for the grand plans of the founders of what would become, today, ZAMPROGNA SA At the end of the 40’s, it installed its headquarters in the capital of the state of Rio Grande do Sul, entering the steel business, definitively, in the 60’s.

It is then appointed as a distributor of flat rolled steel in the south of the country, operating with products from large national mills.

In 1988, engineer Paulo Sérgio Zamprogna, at the time Industrial Director of Zamprogna S/A, decided to get rid of his participation in Zamprogna S/A, creating in the same year the PS ZAMPROGNA Service Center in Canoas, which began working in the distribution of steels, but over time, it started to act more specialized as a Service Center for its improvement, serving the most varied customers from the steel commercial, furniture, transportation, refrigeration industries, among others.

Since 2003, PS Zamprogna has been working in partnership in southern Brazil with Prada (currently CSN Distribuição), which is one of the largest flat steel distributors in the country, and belongs to the CSN group. At the end of the same year (2003) we closed a partnership with another very important customer, at the time Frefer S/A (now Kloeckner Metals) at the time the largest independent distributor in the country.

PS Zamprogna monthly benefits more than 10,000 tons for the most varied customers and currently occupies a prominent position in the metal-mechanical sector of the state, operating in the disputed markets of the states of Rio Grande do Sul, Santa Catarina and Paraná. 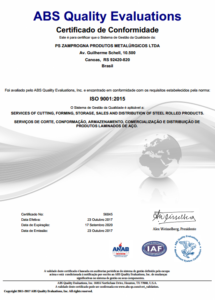 Implemented since 2005, the PS Zamprogna ISO 9001 Quality Management System has been receiving constant investments to maintain the standards and guarantee customers the expected quality. On October 23, 2017, we received from ABS Quality Evaluations the Certificate of Conformity of the Quality Management System ISO 9001:2015, updating the previous certificate of ISO 9001:2008.
Go to Top